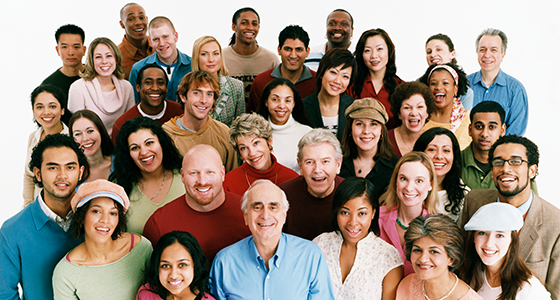 Members of Congress and their staff are always striving to provide better constituent service. That’s why at a recent Congressional Hackathon, sponsored by U.S. House Majority Leader Kevin McCarthy (R-CA) and U.S. House Minority Whip Steny Hoyer (D-MD), the focus was on technology solutions to constituent service. One big challenge that was identified was the constituent-unfriendly and inefficient process for constituent casework. As a leading innovator on Capitol Hill, DotGov.com rose to the challenge and engineered a simple and secure solution to

Since the very beginning of the American republic, providing constituent service has been central to the job of a Member of Congress.  Thousands of constituents seek assistance annually from Members of Congress, with requests ranging from simple to complex. Members of Congress and their staff help individual constituents deal with administrative agencies by acting as facilitators, and some cases, advocates. Typical casework requests include:

All congressional offices carry out some type of casework. They do it for various reasons, including constituent demand and a broadly held understanding among Members and their staff that casework is integral to their official duties. Many believe that efficient and effective casework activities can be part of an essential outreach strategy to build political support among constituents.

Each congressional office establishes its own policies and procedures for constituent service. But, until now, one major source of friction for efficient casework has been requirements of The Privacy Act. The Privacy Act requires that each executive branch agency get authorization from a citizen before sharing the citizen’s personally identifiable information with any other entity.

Until now, this requirement has resulted in the need for a constituent to download and print a PDF form from a Member’s’ website. The constituent completes the form and either mails or faxes it back to the office. In addition to being inconvenient for the constituent, this process can add over a week of wasted time. Rather than immediately helping to solve their constituent’s problem, staff spend time tracking down a mailed or faxed form, then spend time having to digitize it to associate it with the casework documents.

The new Casework Module builds on one of DotGov’s existing technology services, CivicApp™, a subscription-based constituent services mobile app. Members of Congress like CivicApp because they do not pay for development costs and no maintenance is required on their part. The app is platform independent, which means it works equally well on iPhones, iPads, Android devices, or any web browser. From the mobile app, a constituent can access all the typical services offered by a Member of Congress (flag orders, military academy nominations, info. on legislation and votes, etc.). Custom services can also be added.

Our new Casework Module, is built into CivicApp and it can be used as a stand-alone tool on a Member’s website. With our new Casework Module, a constituent can now request assistance by completing a mobile form, sign it with their finger or mouse, and submit it to their Member of Congress.  In addition to being integrated with their casework database, the new tool also includes an custom-designed engine that automatically compiles and renders a PDF authorization form (with the constituent’s signature). The PDF is stored in the Member’s secure database. The digital PDF authorization form complies with all requirements of the The Privacy Act. 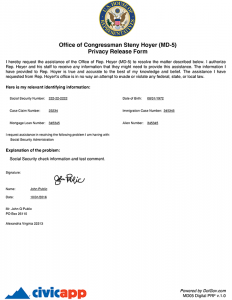 In addition to significantly improving the experience for constituents, DotGov’s  Casework Module increases staff efficiency and saves hours of valuable staff resources each month that were spent on tracking down the digitizing required casework authorizations.

The new Casework Module is available as part of CivicApp or as a standalone monthly subscription ($79). Please contact us if you’d like to learn more about the new tool and its use on your website or as part of a CivicApp subscription (or both!).